According to work compiled by Dimtri Speck, June historically has been the seasonal low for gold prices in USD.  Why? The general explanation being nothing more than the summer vacation season causes less liquidity and seasonal holiday inventory re-stocking doesn’t begin until September. 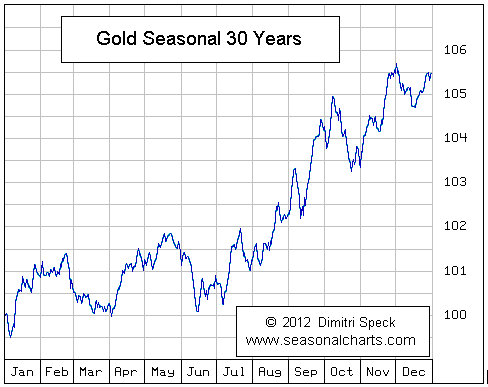 The gold market has been held captive by the threat of a Fed rate hike month after month for the past year. Traders knowing that investors remain on the sideline not wanting to get in front of market uncertainty following a rate hike sell short each rally confident capital flows into gold will not overwhelm their short position*. So far, so good. Physical buyers in the East remain willing buyers on the bid from Western sellers, but are not pushing price.

We believe a Fed rate hike will prove to be gold bullish and a pivot point to higher gold prices just as it was in 2004. Any talk of rate “normalization” is another piece of market misinformation trying to lend credibility to a Federal Reserve that is mastering the pretend and extend game, in our opinion.  Raising rates 200 or 300 basis points to “normalize” after almost seven years of a zero interest rate policy has the potential to set off a wave of untenable market dislocations that could possibly force the Fed to either forever be behind the curve or forced into a quick about face and return to QE with credibility lost.

A couple of points of note in a rising interest rate environment:

*The sale of a borrowed security, commodity or currency with the expectation that the asset will fall in value

Texas Governor Greg Abbott recently signed into law legislation to build a bullion vault that enables the University of Texas to house its physical gold holdings in Texas rather than in New York. The most interesting aspect of the bill is that gold housed in Texas will not be allowed to be confiscated by the Federal government. The move to repatriate gold from New York and London vaults follows on the heels of Germany, the Netherlands, and Austria to secure gold holdings on “home” soil.  Besides the desire for greater control of gold holdings, there remains growing skepticism in the market about the number of paper claims on gold ownership versus the number of ounces housed in global bullion vaults.

The S&P 500/PHLX Gold & Silver Sector Index (XAU) is approximately where it was at the worst of the bear market in gold and silver mining shares in November 2000. 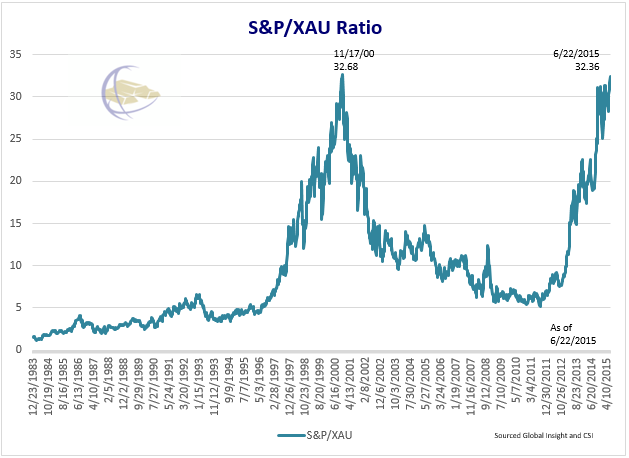 The Philadelphia Gold and Silver Index (XAU Index) is a market capitalization index of precious metal mining company stocks. The S&P 500 is an index of 500 widely held common stocks that measures the general performance of the market.

The shift of gold mining companies to focus on margins rather than attempting to grow production ounces means the industry is going to revert back to raising cut-off levels and mining higher overall grade. As you can see from the chart below, the average grade mined dropped from .08 in 2001 to .044 in 2014. For those miners with the flexibility and the deposits to mine higher grade ore, raising cut-off off grades should result in better cash flow, earnings and return on capital going forward. The flip side for the gold mining industry is that it means declining production profiles and reserves for a number of miners and reinforces our belief that global gold production is set to decline 30% over the next ten years unless gold prices appreciate 100%. 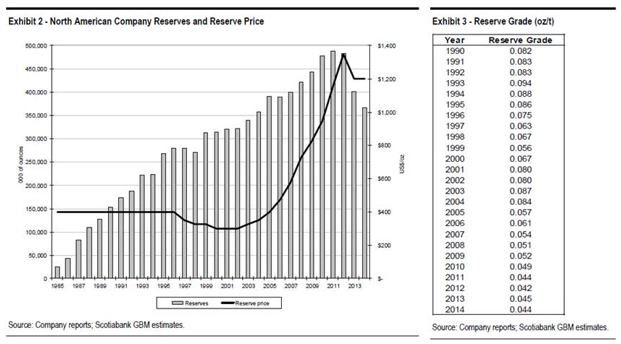