Gold mining shares are set for a record 5th straight year of declines in 2015 unless a significant rally develops in the fourth quarter of this year. The previous period of consecutive down years for gold mining shares as represented by the XAU was three years, which occurred twice. The prospect for a sixth straight losing year seems unlikely, in our opinion, and perhaps the early action of October is a precursor to a strong fourth quarter to erase the losses experienced in the second and third quarters of this year. The XAU will need to rally at least 20% from current levels to close the year above the 2014 close of 68.78. From current depressed levels that may not be asking too much.  We shall see. 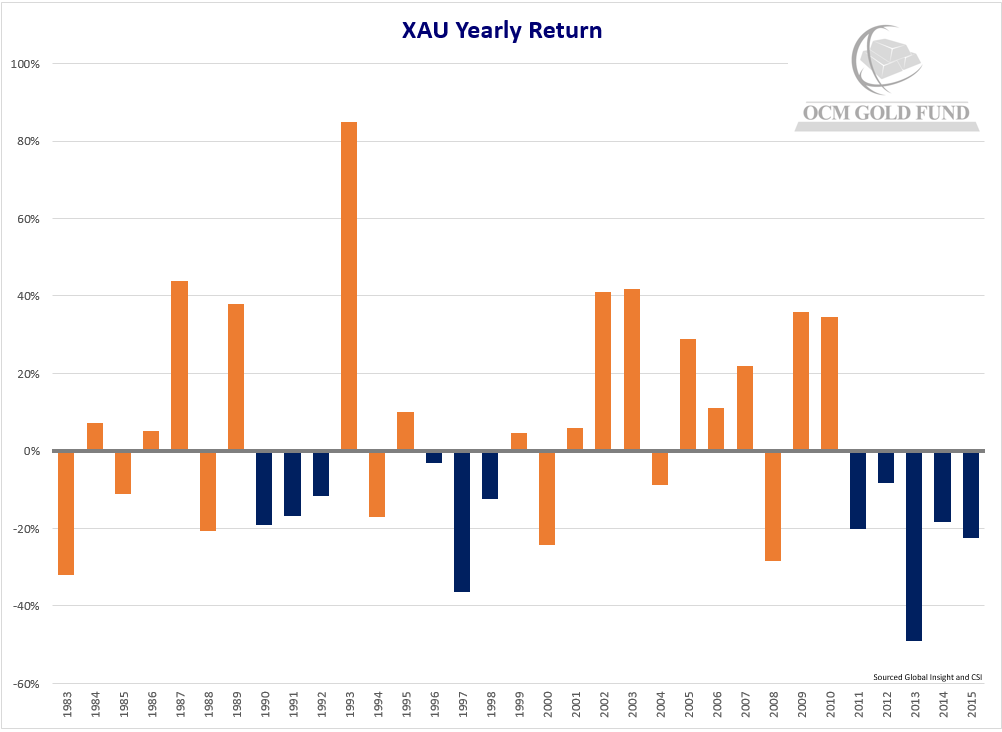 China has been the largest buyer of physical gold over the past three years, surpassing India.  Recent data shows bullion withdrawals from the Shanghai Gold Exchange increasing 37% over last year, with a noticeable pick-up over the past three months. There has been speculation that China’s slowing economy along with its declining stock market will have a negative impact on Chinese gold consumption in country. That logic is contrary to what historically happens when financial assets decline. The move by the People’s Bank of China to depreciate the yuan along with declining confidence in financial assets and real estate, should in theory drive Chinese consumers and investors to appreciate gold’s monetary attributes as a store of value as confidence in the alternatives wanes. Early signs show this to be the case.

Gold Investment Demand – Demand for Futures and Physical are not the Same, Clearly

A chorus of articles on Reuters and Bloomberg repeatedly point to the lack of investment demand for gold as the reason for gold’s price decline but fail to differentiate between paper gold and the physical bullion market. Doug Pollitt of Toronto broker Pollitt & Co put out a good piece recently that we have grabbed a couple of paragraphs from that which references the lack of warehouse stocks on Comex to cover contracts but also highlights just how much gold has been drained from London vaults over the past four years (gold bullion moving from West to East).

Comex warehouse stocks are all out in the open, published as they are daily. Observers of a more alarmist bent will point to the low levels as compared to the open interest, that is, the paper claims against them. To this, a more sober crowd will say that very few stand for delivery in New York and if someone were to ask for a lot of metal there, somehow, some way, the traders there would find it for them somewhere. That somewhere is by default assumed to be London, the center of global bullion trading for centuries. Warehouse stocks in London are not formally disclosed and there is an unspoken presumption that beneath this cloak of mystique there is all the gold you could ever poke a stick at.
Some good sleuthing by Nick Laird at Sharelynx.com has gone some small way to lift this cloak. We reference two documents here: an LBMA paper in 2011 and another in 2015. The topic of these presentations do not relate to the question at hand but they do, in the margins, make reference to LBMA stocks. In 2011, LBMA warehouse stocks stood at about 9000 tonnes. In 2015, they stood at about 6250 tonnes. So, over a period of purportedly rising supply, declining demand and declining price, warehouse stocks in London, that well of apparent infinite bullion liquidity, were drawn down a whopping 30%.

It should come as no surprise that a number of major banks are under investigation for collusion and manipulation of the gold market after they have been fined for wrong doing in forex and Libor markets. Reuters reports the Swiss government has enjoined the investigation into gold price manipulation and has given UBS criminal immunity to come clean on fellow market participants. Gold price manipulation will be added to rigging of Libor and forex markets by the big banks with few being shocked of the egregious behavior of the banks.

The IMF is calling for a global recession next year while the Fed grapples with trying to raise rates for the sake of institutional integrity – I think they lost it . . . The markets are hoping that the central bank put is still in place and more elixir is coming in the form of easy money as equity markets have rallied 5% since the disappointing jobs number . . . Ray Dalio of Bridgewater says QE4 is coming . . . Mark Zandi of Moody’s says the Fed is set for December lift off and four increases in 2016 – good luck with that forecast Mark . . . Glencore is still scurrying the globe to assure investors that it is not the next AIG if its credit rating is downgraded on its $50 billion of debt. We shall see as aggressive traders and derivative players have a way of unwinding fast . . . The bond market is screaming global economic weakness is accelerating as corporate credit spreads have widened versus US Treasuries and junk bonds prices have collapsed. The HYG (iShares High Yield Bond ETF) is trading below the important health barometer of 85 with 15.7% of junk debt now in the distressed category . . . The gold story is not just about easy money and currency debasement, it is foremost about credit deterioration as a result of unintended consequences from zero interest rate policy . . . Socgen’s ultra-bear chief strategist, Albert Edwards, is calling for negative rates to be implemented by the Fed . . . At what point do the academics at the Fed get run out of town? . . . Attendance at the Denver Gold Forum was down 12% from last year and the mood was subdued with a lot of “hanging in there” greeting replies . . . We have argued that gold is in a mid-cycle correction and that the gold shares are in a horrible bear market, therefore gold shares are unlikely to bottom ahead of gold prices but rather react to gold prices moving up.