On the heels of a 9% decline in exports, two months of capital outflows, a stock market crash and the renminbi not being included in the SDR currency basket, the Peoples Bank of China moved to lower the renminbi peg to the US dollar with a 3.4% devaluation over two days. For one billion Chinese looking to protect purchasing power, gold purchases may accelerate as they did last week when Shanghai gold delivery volumes leapt two to three times normal levels (a little front running no doubt). With the European Central Bank and Bank of Japan in full debasement mode, the question that must be asked is, “How long the U.S. can hold off before it rejoins the currency debasement game?” The bottom line, in our opinion, is paper currencies are going to become increasingly suspect going forward and gold is going to look increasingly attractive as a store of value and a hedge against monetary policy run amok.

There has been such a tremendous build-up to the Federal Reserve beginning an interest rate hiking cycle the thought of Howard Hughes’s Spruce Goose comes to mind – a lot of talk with great expectations but when it comes time to fly the Fed will barely get off the ground before it finds itself grounded. Our view continues to be along the lines that the Fed would like to raise rates for institutional integrity, but will most likely be forced to enact another round of QE as its only policy alternative in the face of global economic weakness and declining equity markets. Market participants may soon recognize monetary policy is limited to monetary debasement at an accelerated rate in order to create the necessary inflation to deal with elevated debt loads and unfunded social obligations going forward. 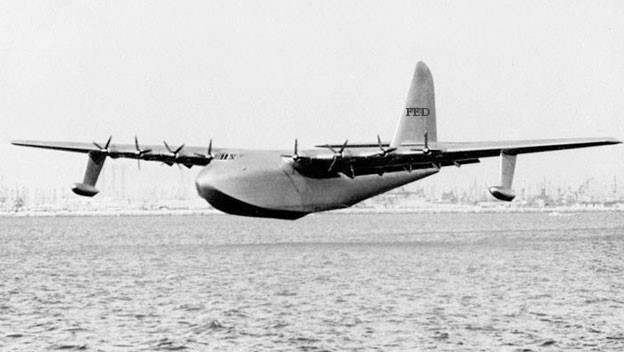 The Bank of China announced it has increased its gold reserves to 1658 tons from 1054 since its last announcement six years ago, a 57% increase. Market commentators have pointed to China’s gold holdings announcement as one of the explanations for gold prices moving lower in July. We must ask ourselves, are we now supposed to believe China’s numbers when all other economic data has been held in disbelief? It is possible that China could well have a few thousand tons in a non-reporting entity based on how much gold has been imported and produced in China over the past six years. In any event, the bears used the announcement as a signal that the Bank of China was not on the bid as much as thought and therefore pressed the market lower through the $1100 level. Physical demand has since appeared in India, China, the Middle East, and in parts of Europe along with sales of American Gold Eagles soaring in July to more than two year highs of 170,000 ounces.

Signs of a Bottom?

The derision of gold hit a feverish pitch over the past couple of weeks by the financial media, but the crescendo most likely hit when the Wall Street Journal ridiculed gold bulls with their fascination with “pet rocks.1” Other signs, sentiment indicators readings of zero – no bulls, all bears. Hedge funds going net short for the first time since the data has been compiled. S&P 500/XAU and Gold/XAU ratios blowing out to all-time highs shows the level of capitulation trade taking place.

We have referred to gold production peaking due to improved capital discipline within the gold mining industry curtailing production for the sake of optionality to higher gold prices in an environment where investors have access to bullion ETF products. But as Goldcorp points out in this slide, the discovery of new gold deposits has peaked and there is a twenty year lag from discovery to production. We would also add that a number of the deposits that are on the discovery side are not economic at today’s gold prices so the number of ounces discovered is actually inflated. 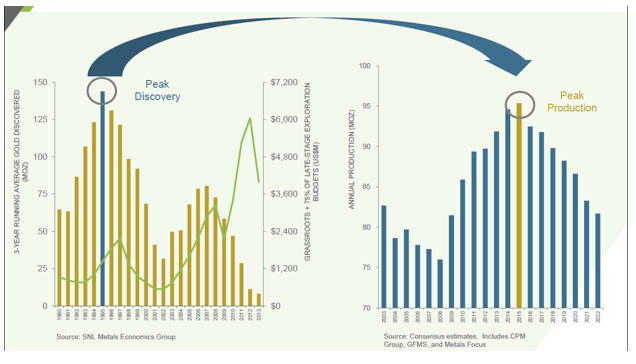